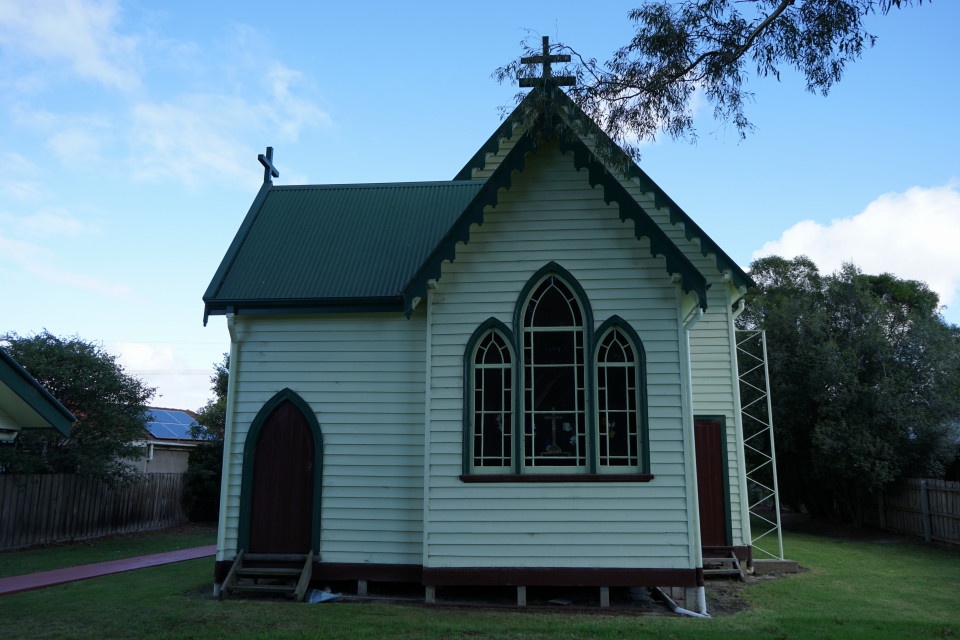 The township of Toongabbie, by repute following its namesake in a part of New South Wales west of Parramatta with which it shared many topographical features, came into existence in 1862. It grew rapidly as a direct result of the discovery of gold at Walhalla. Records show that Divine Worship was conducted in Toongabbie as early as the 1860s, generally in the home of John Routledge Majendie, and later on in the school building. Anglican churches emerged in Walhalla, Traralgon and even nearby Eaglehawk, however, it was more than twenty more years before Toongabbie had an Anglican church it could call its own.

Ministering of the parish in the early days was a hard life as noted by the Rev.A.W.Cresswell, from Woodend, when he conducted his first service in Rosedale in 1868. His was an “arduous job” requiring him ‘to preach at Rosedale in the morning, jump on one’s horse and gallop to Toongabbie, and Heyfield or Walhalla in the afternoon or evening … is no child’s play in the estimation of those who know the country …”

The Rev.G.W.Kelly, a curate from Sunbury, replaced Cresswell as minister in the Rosedale-cum-Toongabbie and Cowwarr Episcopal district in June 1873. He often conducted services on Sunday at Cowwarr in the morning, Toongabbie in the afternoon and Heyfield in the evening.

Finally, in 1881, the Rev. Cadwalader P. Thomas, as Priest-in-Charge of the Parish of Rosedale, oversaw the monetary subscriptions for the building of a church at Toongabbie which proved to be an eventful affair.

Crown Grant – vol 1528/folio 476- allotment 4 – section 1
The Right Reverend James Moorhouse, the Honourable William Edward Hearn and the Honourable Thomas Turner A’Beckett all of Melbourne purchased allotment 4 from the Crown on 15th October 1883. This land was purchased for the purpose of building a new church building thereon.

On the 11th August, 1887 (almost four years later) the land was transferred from the above three gentlemen into the Church of England Trusts Corporation for the Diocese of Melbourne.

Sadly, the new church building was never built on this parcel of land being allotment 4. In fact, it had been built on Allotment 5 in 1884 some 3 years earlier by Henry Bosustow (same builder of Mechanics Institute). Having no need to keep this parcel of land (still vacant) it was sold by the Diocese of Melbourne on the 29th October, 1889.

Alexander Douglas of Sale purchased Allotment 5 from the Crown on 13th February, 1866. The new church building was built in error on this allotment during 1884 instead of on Allotment 4.

When the powers to be realised an error had been made the matter needed to be addressed without the owner of the block knowing that a church building had been built on his land.

Mr William Fryer who was a devoted member of St. David’s congregation volunteered to approach Mr Douglas with a view to purchasing the property. Mr Fryer in due course became the owner of Allotment 5 on 14th December, 1888 thus saving the Diocese of Melbourne further embarrassment.

The Registers of Service at St David’s over the last century and a quarter tell of epidemics, Children’s services, confirmation and baptisms. They record memorial services through, and for, various wars, conflicts and disasters, the reading of Banns of Marriage, and weddings, funerals and festival’s.

The following early photo depicts a building with no front porch or bell tower on its western end (right side of photo). Both structures that you see today were added in 1900. Although not clear on the photos, there was originally metal wrought iron lace work along the top of the roof line and a sample of this lace work was found under the building when it was being restored in 1992.

Photo 2 (c1905) shows the new bell tower and front porch which were added to the structure in 1900. The porch was found to be a necessary addition to prevent the prevailing winds from blowing directly into the building every time the front door was opened.

The Uniting Church ceased the conduct of services in 1985, and the building was demolished in 1994. Some of the materials were used in the restoration of the Toongabbie Mechanics Institute in 1995-6, and the land acquired for public use by the Toongabbie Recreation Reserves Committee.

St David’s Church is a timber building, like other public buildings in the town but it boasts, however, some of the finest church furniture in the district. The prayer desk, pulpit and lectern were dedicated as a ‘Thank Offering for Peace’ in 1919 from Albert and Elizabeth Ellissmith, with sanctuary chair also donated by Elizabeth in 1922.

In August 1919, the Bishop of Gippsland dedicated the reading desk and choir stalls to the memory of the Rev J Routledge Majendie and Sister Annie Laura. The altar was a gift from the people of Christ Church Cowwarr, and dedicated by the Ven. Clem Watts in 2001 and covered by a retable, which was part of a rafter from Westminster Abbey – presented by the Rev. A. Ellissmith for St. David’s golden jubilee in 1934, and said to be around 800 years old.

St David’s has often needed refurbishment. Major works were undertaken for its centenary in 1984 and a further refurbishment over the last few years, including air conditioning and the digital concert organ, all made possible by the generosity of the late Walter Bruce Scott. It is this latest and most spectacular refurbishment that has seen the church return to its formal glory influenced by the following  photo c1915.

2006 renovation showing partial works completed. Prior to the renovation the entire wall height was the same colour as right back and side wall on left photo. The burgundy dado was only re-introduced with this recent renovation.

For more great information about the history of Toongabbie you can read the book  ‘Toongabbie, Gippsland. A gateway to the Walhalla Goldfields’ by Alan Harding and Roger Ries

An Ode to Toongabbie