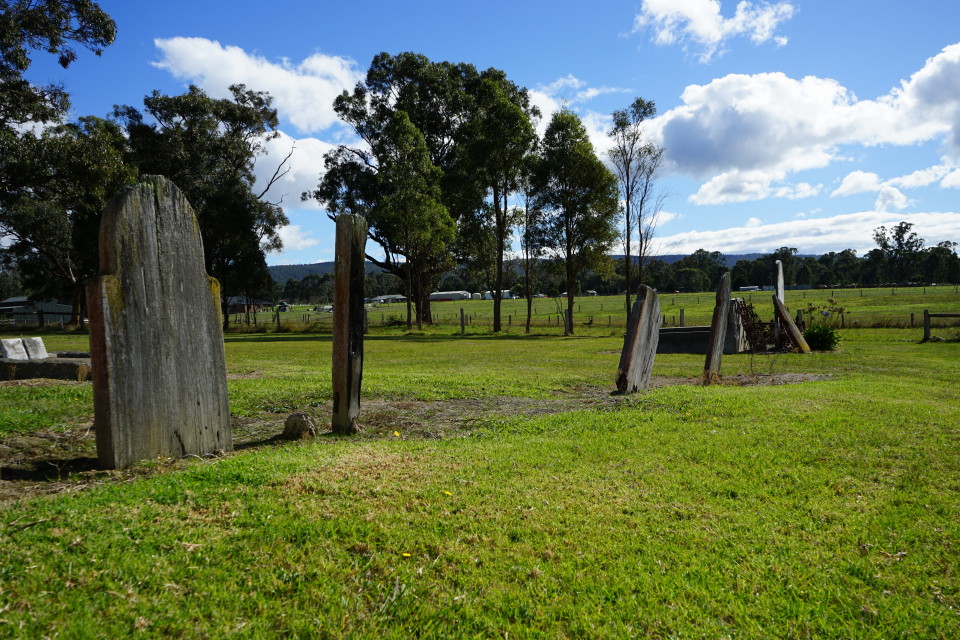 The Toongabbie Cemetery is located on the corner of Cemetery Road and Traralgon-Maffra Road and is still in use today.

A link to Walhalla

Disease was a constant threat in the late 1800’s with little chance of surviving the most rudimentary illnesses due the distance to access medical attention. Along with this were the many deaths that occurred on the dangerous journey between Toongabbie and Walhalla.

Initially, burials in Toongabbie had been made in close proximity to the town in the early years of its existence; however, they were later performed on higher ground towards the south-west edge of the town on what officially became the Toongabbie cemetery in November 1873. Upon surveying of the site, the surveyor George Jones noticed graves on the rise immediately to the south with eight graves already existing.

As the cemetery was not gazetted until late 1873, any previous marked sites erected with wooden monuments or fences have long since been destroyed due to fire or vandals. Records of burials exist only from the late 1880s:          www.australiancemeteries.com/vic/bawbaw/toongabbie.htm

There remains the mystery of another ten-acre cemetery, which appeared on a November 1865 map south-east of the town near the Toongabbie Creek and on the original road to Rosedale. No official records have been found of its existence, and it is not known if people were actually buried there.

The historic cemetery site is the same site used by the townsfolk of Toongabbie today and also serves the area of Cowwarr and Glengarry. Of note, many early residents of the district are also buried in Sale where they died after a period in the Sale Hospital.

The Toongabbie Cemetery is the burial home to Ned Stringer , who discovered gold at Stringers Creek; now known as Walhalla, and another gold field pioneer, John Russell. There is no indication on Russell’s grave that he discovered gold at Russell’s Creek, the location that took his name, nor that he was one of the first Europeans to ascend Mount Baw Baw along with Baron Von Mueller and party. Both Stringer and Russell played important parts in Gippsland history

The story of John Russell

John Russell, who discovered gold on Russell’s Creek in the Tanjil River district, was buried at Toongabbie in November 1903.

John and his brother William joined the rush to the Baw-Baw gold fields in 1859. John Russell ascended Mount Baw Baw in company with the botanist and explorer Baron Von Mueller in late 1860. While on this expedition he noticed auriferous signs in a stream and found good alluvial gold. The obligatory rush occurred and the resultant mining settlement was called Russell’s Creek.

In 1865, after the excitement of the gold rushes, John Russell established a blacksmith and wheelwright’s shop at Toongabbie. John Russell eventually settled on land in Tyers to farm and when his health deteriorated he moved to Traralgon where he remained to his death, aged 74

An excerpt from the Gippsland Farmers’ Journal dated 24/11/1903 describes the burial:

Here [in the Toongabbie Cemetery] the old pioneer was laid to rest, in the same God’s Acre where reposes the body of another famous identity of the early Gippsland goldfields – poor Ned  Stringer, the discoverer of Walhalla’s wealth, who opened riches for others, but himself closed a chequered career in homeless poverty.

The memory of both these old pioneers will be perpetuated so long as the names of Russell’s Creek and Stringer’s Creek continue, and we of to-day, when we recall what Gippsland development owes to such as these and others, they laboured and struggled amidst obstacles, difficulties, and disappointments which would have blanched the courage and stifled the ardour of any but that true old British stock and pluck, which has transformed these fair Australian States from darkness and savagery to the light and prosperity of modern civilisation.

For more great information about this story you can read the book  ‘Toongabbie, Gippsland. A gateway to the Walhalla Goldfields’ by Alan Harding and Roger Ries

The Story of Ned Stringer