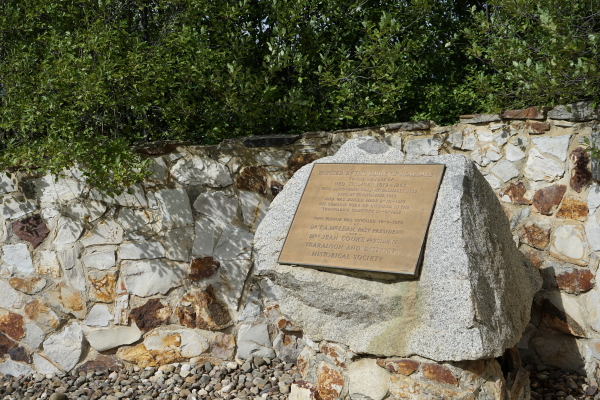 Edward (Ned) Stringer is an important historical person in the establishment of the Toongabbie Township due to his discovery of gold at Stringers Creek.

Stringer, was born Edward Randel in Lancaster, England in 1819, and was sent to Tasmania in December 1842 for ten years after being convicted of burglary and theft.

He was granted a ticket-of-leave in December 1847 and found his way across Bass Strait to Melbourne where he joined the many and various gold rushes. Come 1862 he found himself at Fulton’s Creek, pursuing alluvial gold with his mates. In November 1862 Stringer led a group of miners down the Aberfeldy and Thomson rivers prospecting tributaries along the way. Eventually, Stringer was successful and found gold on a tributary and it was this creek that became known as Stringers Creek.

Later, the township that sprung up as part of the gold rush, also known as Stringers Creek, was renamed Walhalla in April, 1866.

Excited and confident about the importance of the find around this area, Stringer strode out of the hills in January 1863 to register the claim.

By late January 1863 the numbers had declined with many miners departing due to the lack of provisions and the low level of water in the creek. Agnes Buntine was one of the first people to take provisions into the half-starved miners on Stringers Creek in January 1863.

She had goods stored at Toongabbie on Campbells Track during the early days of the Walhalla rush. By mid March 1863 Stringers Creek was being called starvation Creek. Campbells Track gained prominence as Toongabbie became an important packing depot.

Gold had already been discovered in the hills but the discovery of payable quantities of gold in the hills to the north-west changed life on the squatting runs dramatically.

Toongabbie Township came into existence as a supply town on route to the goldfields in the mountains. People, supplies and equipment poured up the roads from Port Albert via Sale and Rosedale.
The Toongabbie to Walhalla road became the main artery between the two. Toongabbie owes its origins to the transport industry or carrying trade as it was called then. The pack horse and mule reigned supreme and that is why the Thomson Valley Bush Riders Club relives history every year with the annual packhorse ride from Toongabbie to Walhalla.

While the links between Toongabbie and Walhalla developed, the first faltering steps towards the formation of an agricultural industry in the Toongabbie district were being made.

A miner’s life was hard in those early days and Ned Stringers was no exception. He suffered from ill-health in the winter of 1863 and come down from the hills.

He had been staying at Cowan’s Accommodation House and Store-cum-Hotel after travelling to Sale to get medical supplies for a chest complaint. Unfortunately, ‘about a week later’ he died which was 29th September 1863.

His death resulted in an inquest, which disclosed his poor health and poverty-stricken circumstances. Ned was buried the day after the inquest on the 2nd October 1863 in the bush close by.

For years his bush grave sat neglected in Toongabbie. Its actual position in official documents was hard to determine as there were no surveyed sections, allotments or streets, just bush and main road. So the exact site of Edward Stringers first grave may never be known.

In 1888, Stringers Street was named as it proceeded ‘from the railway gates past the Stringer Grave to the boundary’. The streets were renamed in the late 1970’s and it was again named Stringer but this time called Stringers Road.

Controversy still continued over a suitable monument in memory of Stringer.

On researching the site of Stringer’s second burial, The Gippsland Farmer’s Journal reporter noted in June 1902 that, “so far as we are able to discover, not even a peg marks the resting place of the discoverer of the Walhalla goldfields and its fabulous wealth”. This state of affairs remained for many years.

Again all was not right as they got the date of Stringers death wrong.

This plaque was unveiled 18-4-1970 by Dr T.A. McLean, Past President and Mrs Jean Court, President Traralgon & District Historical Society, erected by the shire of Rosedale to the memory of Ned Stringer 1819-1863 who discovered gold at Walhalla1862, died at Toongabbie 1863 and was buried here 2-10-1863. His remains were re-interred in the Toongabbie Cemetery 15-3-1892

A memorial plaque was donated and placed on Ned Stringers grave in the Toongabbie Cemetery on 21st November 1976.

This plaque in the cemetery reads as:

“Here lies he who sought the Midas seam, where Valkyries played hosts beside his crystal stream in the valley of the ghosts”

In February 1996 it was announced that his memorial would be restored and upgraded courtesy of a partnership between Employment Innovations Victoria and the shire of Latrobe, with funding by the Commonwealth Government.

The new-look memorial was officially re-opened in early March 1996 and is situated on Hower St, off Stringers Rd, Toongabbie.

For more great information about this story you can read the book:

‘Toongabbie, Gippsland. A gateway to the Walhalla Goldfields’ by Alan Harding and Roger Ries

An Ode to Toongabbie