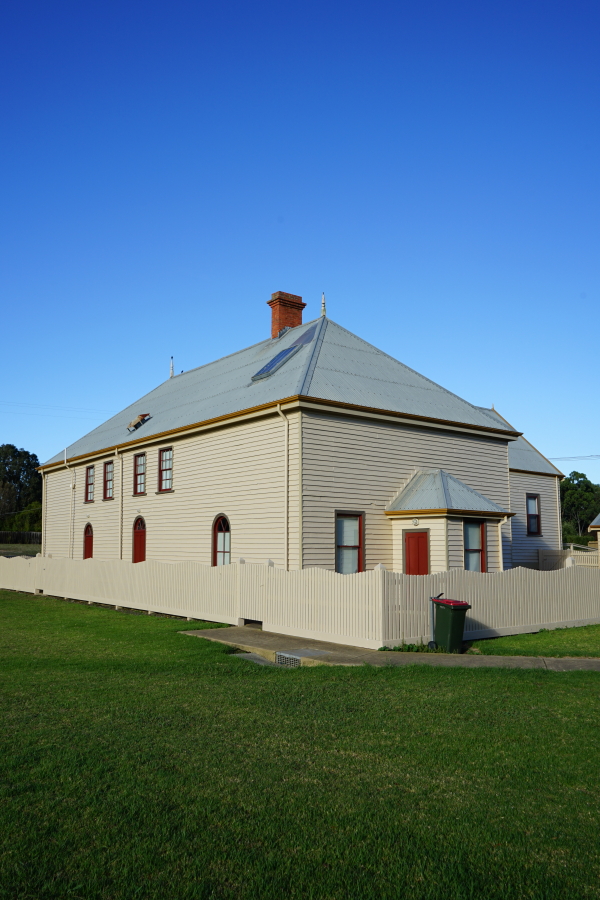 Listed on the Victorian Heritage Register

The Toongabbie Mechanics Institute was constructed in 1883 by the builders Hollingsworth and Bosustow on a site reserved for this purpose within the Cricket and Recreation Reserve. Hollingsworth owned land in the township opposite the Mechanics’ Institute. A local person, Mr WH Goodwin, is reputed to have been the driving force behind the establishment of the Institute. A miner and storekeeper from Walhalla, he came to Toongabbie in 1877 and opened the butter factory and sawmill.

No architect is known to have been involved. The method of construction being timber frame and weatherboard with a corrugated iron roof – is typical of Gippsland at that time. The two-storey extension was added in 1891. This made The Lodge Room, Library, Stage, Supper Room, Kitchen and two other small rooms available.

The Mechanics Institute served its small rural community by bringing them together. Dances, agricultural shows, C.W.A., school functions, weddings and private celebrations were just a few activities stage in the hall.

The Institute also functioned as a lending library, a venue for lectures, the court of petty sessions, and an agency of the Bank of Australasia. It was the social and cultural centre for the town and surrounding district and played an important role in linking the pioneering community to the Walhalla Goldfields. The Mechanics Institute is now the oldest remaining public building in Toongabbie.

Toongabbie owed its early prosperity to being the gateway to the busy Walhalla Goldfields. Conversely, when the mines in Walhalla began to decline around 1910, Toongabbie’s future as a transport town also began to decline.

Although the Mechanics Institute held many dear memories for the townsfolk, the rising cost of maintenance saw the hall start to deteriorate. A newly completed community centre meant functions were held there and by the late 1970’s, the old hall had fallen into a state of disrepair.

The townspeople of Toongabbie were divided as to the future of the historic building. At a public meeting in September 1981, the future of the hall was put to the vote. The resolution to save the old hall was won by the narrowest of margins -one vote.

The building at this point had virtually been abandoned. The majority of its windows were broken, walls had been vandalised and the lack of bracing throughout the hall meant that it swayed significantly in strong winds. In1988, DSE were contacted by a concerned resident that the hall would fall down if something wasn’t done to support it. Emergency internal bracing was provided to the west wall to prevent the hall collapsing in the strong winds. As well as this, the halls fittings had become loose and the weatherboards had begun to fall off. The roof needed replacing and the floor required restumping. The restoration would be extensive. Although the hall had significantly deteriorated, it gained entry into the Victorian Historic Buildings Register in 1983, and the National Estate register via the Australian Heritage Commission in 1992.

In conjunction with the Historic Building’s Council, the Department of Conservation and Environment and the patience and determination of committed locals, the restoration of the hall began.

In November 1991, a public meeting was held to canvas public support and the following work was completed: re-stumping of the building (1989), bracing of the building, removal and repair of weatherboards and external painting & restoration of windows.

In early 1995, planning commenced for the restoration of the interior of the Mechanics Institute. The restoration was completed by mid 1996 with the assistance of the Federal Government and Department of Employment, Education and Training through the New Work opportunity program initiated by Kevin Kennedy, local resident and Managing Director of Gippsland Group Training (now know as Apprenticeship Group Australia) and co-ordinated by Gippsland Group Training supervisor, local resident, Graeme Balcombe.

They carried out the following work: renewal of hall floor, refurbishment of kitchen, internal painting, refurbishment of internal fittings, replacement of the lodge floor and ceiling of the library room and construction of new toilets.

The hall was re-opened on September 1, 1996 by the Honourable Peter McGauran, M.P., and Federal Member for Gippsland.

Extensive landscaping was completed with the addition of a picket fence. There is always ongoing maintenance with many projects on the agenda.

There are few comparable timber Mechanics’ Institutes of the size and intactness of Toongabbie and its sheer size is a reminder of the prominence of the town in the days when it was the last staging post on the route to the Walhalla gold mines.”

Perhaps one of the most interesting heritage buildings found along the region’s gold trails, it is a reminder of Toongabbie’s hey-day

As well as its historical significance, the building is important for its naive architecture, its rarity and intact condition.

The Mechanics Institute is one of a number of timber buildings remaining in the town; in particular small timber cottages along King Street and the 1884 St David’s Church.

Click here for more information to view and/or hire hall.

For more great information about the history of Toongabbie you can read the book  ‘Toongabbie, Gippsland. A gateway to the Walhalla Goldfields’ by Alan Harding and Roger Ries

The Naming of Toongabbie