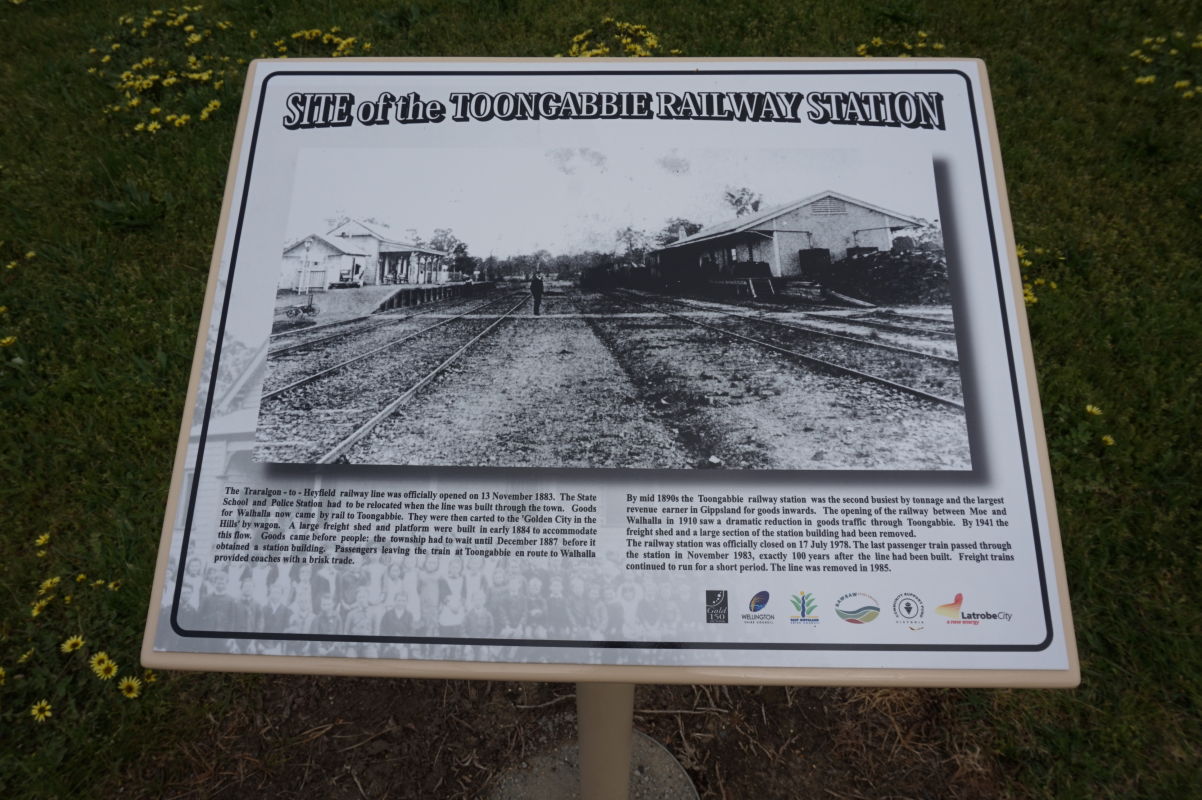 The town of Toongabbie began in 1863 as a supply depot and staging post on the road from Port Albert to Walhalla. Goods were hauled from Port Albert to Toongabbie via both Sale and Rosedale by bullock wagons and then transferred to packhorse and mules (over 600 in all) for the arduous journey over tortuous tracks to the Jericho, then later the Walhalla Goldfields. As tracks turned to roads, horse teams took over.

The advent of the railways in the 1870’s and 1880’s allowed goods to be transported overland. A railway line from Melbourne to Sale was completed by the mid 1870’s.

A branch line from Traralgon to Heyfield was commenced in late 1882 and was completed by the contractors, Lewis P. Moline and James King in the time for the official opening on the 13th November, 1883.

A crane was installed in the station yards in mid 1883 to lift the heavy piles, logs and sawn timber. It was situated on the north side of the railway line and to the west of the proposed goods shed and platform.

Goods, however, came before the comforts of travellers in a town dependant on the carrying trade.

In May 1884, the town celebrated the opening of the new railway department built goods shed and 150 ft long platform with a grand ball in the newly completed Mechanics Institute. It was to house thousands of tons of goods over the years, most of it bound for Walhalla.

For the next 26 years the sight of wagons loading at the goods shed pointed to the reason for the very existence of Toongabbie.

It was not until June 1887, however, that plans were in place for the railway station buildings itself.

Tenders were called for a 45ft long building comprising of a booking office, general waiting room, ladies waiting room and out offices including toilets. The construction of the station building which cost £368 commenced in August 1887 and was completed by years end. Toongabbie finally had a respectable railway station building, four years after the official opening of the railway line.

The Toongabbie railway station achieved the distinction of receiving the second highest tonnage of inward goods in the mid 1890’s for the whole of Gippsland behind only Korumburra which was buoyed by it association with the coal industry.

It was not uncommon to see upward of 100 trucks on the rails at the station on any given day during the boom times.

The station also achieved the distinction as the highest revenue earner of any Gippsland station for inward goods in both 1895 and 96. As a consequence of a flourishing timber industry, the Toongabbie railway station became even busier on top the Walhalla goods traffic.

1886-87 was a boom year with tonnage out of the railway station reaching 6,485 tons. This comprised mainly red iron bark from the local foothills which became a much sort after timber, flourishing in the Melbourne market, and forest red gum from the Plains. Red gum blocks were extensively used in the construction of many roads in Melbourne in the latter part of the 1800’s. A number of sawmills were erected in the railway yards after 1990, the last one by John McMillan in the early 1950’s.

The good times for the Toongabbie station were not to last, however, and by 1909 the inward tonnage had dropped alarmingly.

This was brought about by the closure of many of the gold mines in and around Walhalla and also by the construction of the railway line from Moe to Walhalla in March 1910. The carrying industry was now no longer viable and many of the local carriers who had plied their trade for over 40 years were forced to leave the district.

The huge goods shed were now silent and empty with the demise of the carrying trade.

By January 1924 a large section the goods shed had been removed, the station masters position had been made redundant and to add insult to injury the crane was also taken away.

By 1941 the greater part of the station buildings had been removed along with the station masters house and the remainder of the goods shed and platform.

In late 1976 it was announced that the Traralgon to Maffra passenger train would be discontinued and be replaced by a bus service. The railway station building itself was officially closed on the 17th July, 1978.

For years the Victorian railways had been chipping away at the railway station and yards taking this or that away.

The final indignity saw the removal of the station building and associated structures in 1979. The last passenger train to use the line was pulled by the ‘K.153′, a steam locomotive which carried 500 passengers on a sentimental journey from Traralgon to Maffra and return on a weekend in November 1983, exactly 100years since the opening of the line.

To complete the total demise of the once proud railway station yards, the railway lines themselves were pulled up in 1987.